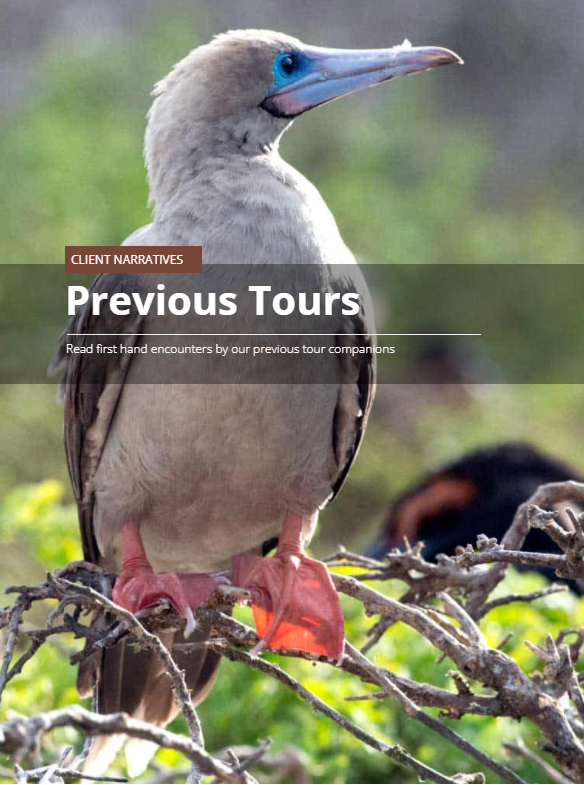 My memories of our Mirrabac Galapagos Explorer trip

Jane and I joined another Mirrabac tour, this time to Easter Island, Ecuador, & Galapagos Islands. Sixteen of us, included Rob and Maureen (tour leaders) along with Noel and Paul from previous tours. Good to have familiar faces, but we soon got to know the rest of the group and all got along well.

Looking from the plane I saw a tiny triangular dot in the Pacific Ocean, 4025km from Tahiti, and 3,720km from Chile with only sea between. The island’s outline was etched in white from the huge waves breaking on the rocks and cliffs along the coast. Anakena Beach is the only sandy beach and there’s no sheltered harbour, just at Hanga Roa (the only settlement), a bay with a breakwater to provide some shelter for the fishing boats. The history of Easter Island was absolutely fascinating, if a bit scary. By deforesting the island they had almost became extinct – no trees meant little or no water, so no food, no timber etc. I was fascinated by the local Rapa Nui people and wondered at the similarities between them and the Maori people of New Zealand; similar features and similarities in the language. How did they, in a double‐hulled canoe, find this tiny island so far removed from any other Polynesian island, sometime between the 4th and 8th century A.D? And then there is the question of the relationship between the Rapa Nui and the Incas, posed by the similarities in characteristics evidenced in their construction of the Moai and stone walls. It was a haunting spiritual place in which we had absolute freedom to wander and explore. And of course the most famous of all, the Moai, apparently built to pay homage to the Rapa Nui’s ancestors. They are massive, ranging from 1 – 20 metres high, mostly placed in groups at various spots around the coastline, but many abandoned on the slopes of the volcano Ranu Raraku where the quarry was situated. How were they transported? Is this why the island became deforested? Why were the Moai subsequently flattened?

Loved our few days in Ecuador and would love to spend more time there. Ecuador is a country of contrasts: the Spanish people and the native Indian people; the high mountainous country and the flat river delta at the coast. We visited Quito and Guayaquil, one on steep rocky hillsides the other on the flat river delta. We were not expecting to do any shopping on this trip, but we were taken to two market towns: Otavalo Indian market and the nearby Cotacachi leather market. Very soon we had “done” the Xmas shopping: scarves, belts and bags for the ladies, leather wallets and belts for the men, and for us lovely soft leather handbags! And you should see the beautiful soft leather, bright red jacket that Jane bought for herself!!!

Next, an 8‐day cruise on a 16‐berth launch around the Galapagos Islands. What a marvellous and friendly crew, there to ensure we were well looked after, extremely well‐fed and that we really enjoyed our trip. Wonderful wildlife: love the Blue‐footed Boobies, Albatross, Frigate birds, land and marine iguanas, sea lions; walking in around and right up close to them all. It was interesting to learn about ‘Lonesome George’ the last remaining tortoise from one of the islands. Attempts have been made to breed from him to endeavour to preserve the species but to no avail. However, recently I have heard that ‘Lonesome George’ may become a father. He has been successfully mated with a female who is of a closely related species. Whilst returning to the beach after snorkelling around the reef, I became surrounded by young, cavorting sea lions, an amazing experience! The tickle of whiskers on my cheek as one swam past from behind and then acted as though it was inviting me to go with it. Snorkelled with the beautiful reef fish, saw only two sea turtles. 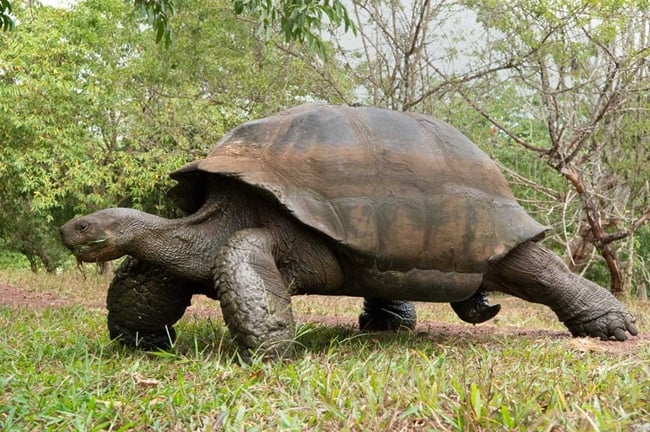 Don’t just read our account of touring Easter Island. Join us for the Next Tour.